Avon & Somerset Constabulary is the Home Office police force in England responsible for policing the county of Somerset and the districts of South Gloucestershire, Bristol, North Somerset & Bath and North East Somerset. The force, providing service for 1.5 million people, is one of the largest in England.

"SYSTRANLinks fires information back to the SYSTRAN web site and returns it when the translation is complete. It literally takes seconds. It's a very cost effective solution. We have had good feedback with regards to community policing, it has really helped the force. Importantly it has also encouraged victims to report information about crimes that otherwise they may not have. Citizens can now engage with the police on their own terms and this ensures a good relationship." 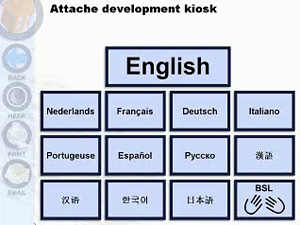 The pioneering police kiosk service provides a live access point to police information and services through a simple touch screen interface which is housed in a distinctive kiosk. The services are available in two ways: stand-alone access points, and across the numerous I-Plus public access points.

A few minutes with Avon and Somerset Police

As part of it's commitment to enhancing community relations, Avon and Somerset constabulary operates a number of information kiosks throughout its area of policing.

The kiosks, which are currently situated in police stations and supermarkets, offer the local community and visitors to the area, a facility to find out information about the police force, its activities and its overall performance statistics.

Included as services on the kiosks are; news about the area, local crime statistics, traffic updates, notices, information about jobs, an overview of local facilities, contact and employment information and important documents relevant to the community. The roll out of the kiosks was described as pioneering and the force has many plans to extend the service.

Peter Bridger, senior web site programmer, explains, "Phase 2 of the project went live in December 2006 as a pilot scheme and was then extended to include 14 more kiosks in 2007."

Although the constabulary was already offering some facilities through kiosks, Bridger said that it wanted to update and re-launch them, with new and improved services. To do this it turned to Omega First and SYSTRAN, leading players in the translation software market.

"As part of our due diligence, we conducted an investigation into potential partners and completed some background research on machine based translations. We approached Omega First, who then introduced us to SYSTRAN. We developed the relationship with Omega First and went forward from there."

"We wanted to update the kiosks, adding a touch screen interface to make it easier for people to use, to find out information. It had to be suitable for a multi language audience but still needed to have a true community feel about it."

In order to make this possible, the force invested in the SYSTRANLinks solution - an online service that is hosted by SYSTRAN which offers real time translation in a customisable, multilingual hub. When visitors access the kiosks they could select the language of their choosing and the site would be translated within a few seconds.

The appeal of such a system was immediately apparent to Bridger. "Most products are software driven, but we needed something more complex so that each kiosk could operate quickly and effectively. SYSTRANLinks fires information back to the SYSTRAN web site and returns it when the translation is complete. It literally takes seconds."

The fact that information is stored centrally was also appealing, as it would let administrators, and the kiosk programmes, continually access any translations already completed and then re-use them, or if necessary, just edit the information if easier. Bridger says that it currently works with 13 languages and there are plans to add to this. In particular, they have just upgraded to include Polish.

"With any translated materials, we use a disclaimer to say that the content should be used as a rough guide, but we are constantly working with Omega First and SYSTRAN to review the system and improve the text. We also plan to introduce regular manual checks – as part of a development and improvement programme – to ensure quality control in the future." 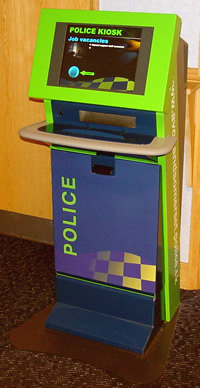 The system has already created many benefits for Somerset and Avon's police forces. Although currently there are just over a dozen kiosks the user experience has proved to be a positive one, and there are definite plans to roll more kiosks out.

"We have had good feedback with regards to community policing, it has really helped the force. Importantly it has also encouraged victims to report information about crimes that otherwise they may not have. Citizens can now engage with the police on their own terms, and this ensures a good relationship."

Because of the success of the implementations, Bridger said that plans are now in place to put kiosks in other areas with heavy people traffic, such as train stations, airports and bus stations, "the response in the shopping centres has also been great," he explained.

Other forces, impressed with the results of the system, have now hinted that they would be interested in rolling out similar services, potentially paving the way for a nationwide release of kiosks – an initiative that would drive national benefits.

The Avon and Somerset Police distinctive green and blue kiosks feature a multi-lingual interface and printer. Kiosks are available for citizens to use in multiple constabulary offices.